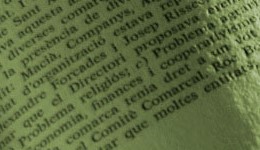 «Transferential Poetics, from Poe to Warhol», por Erin Wunker – «Queering Acts of Mourning in the Aftermath of Argentina’s Dictatorship: The Performances of Blood», por Dolores Resano – «Fiery Cinema: The Emergence of an Affective Medium in China, 1915-1945», por Iggy Cortez

Transferential Poetics, from Poe to Warhol

Feelings move. We know this, and yet naming that movement is tricky. We rely on familiar descriptions—happiness is contagious, sadness floods over one—to articulate the force and flow of feelings. But the effects and accretions of these affective movements is, perhaps, where the most interesting exchanges occur. Further, in the field of critical literary studies, familiar frameworks are reanimated by affect theory. Take poetics, for example, which has traditionally been understood as a mode of literary theory predicated on analyzing form. An affective reading of poetics, however, reorients our critical eye to force. An affective understanding of poetics makes room for the reader to focus on a text’s movement, trace, and transfer. If feelings move, an affective understanding of poetics is a method for articulating the form, function, and force of those moving feelings. This is Adam Frank’s foundational claim…

QUEERING ACTS OF MOURNING IN THE AFTERMATH OF ARGENTINA’S DICTATORSHIP: THE PERFORMANCES OF BLOOD – DOLORES RESANO

Queering Acts of Mourning in the Aftermath of Argentina’s Dictatorship: The Performances of Blood

Cecilia Sosa’s volume offers an incisive, heart-wrenching yet joyful exploration through the aftermath of the convulse years of the military dictatorship in Argentina (1976-1983), which brought horror and death to Argentine society with an estimated 30,000 people disappeared by the State (according to human rights organizations; 9,000 according to official figures), and of how Argentine society has managed to deal and engage with loss. The restoration to democracy in 1983 brought further pain by the passing of the “laws of impunity” (Obediencia Debida [1987] and Punto Final [1986]), which ruled that the crimes committed by military personnel below the rank of colonel would not be prosecuted, as they had been carried out by subalterns bound by “due obedience” to the military chain of command. Crimes against humanity would be, thus, left unprosecuted, with the only exception of the abduction of children born in captivity (an estimated 500). The laws sought, allegedly, to put a “full stop” to national unease and to help Argentine society to move on. A second blow was delivered…

FIERY CINEMA: THE EMERGENCE OF AN AFFECTIVE MEDIUM IN CHINA, 1915-1945 – IGGY CORTEZ

Fiery Cinema: The Emergence of an Affective Medium in China, 1915-1945

Weihong Bao’s Fiery Cinema: The Emergence of an Affective Medium in China 1915-1945 innovatively combines a rigorously researched history of cinema in early 20th-century China with audacious theorizations on reception and spectatorship, affect theory, and media genealogy. Bao’s ambitious study aims to integrate elusive dynamics and intangible materials into a historical reconstruction of Chinese cinema’s numerous permutations from the silent era to World War II. While performing close readings of contemporary media theory, Chinese film reviews and journals, and key sequences of surviving films, posters and photographs, Bao also teases out the impact of discourses and practices infrequently seen as cinematic. Her case studies, in fact, cover an eclectic range of objects and contexts including irretrievably lost films, affective and somatic structures of experience, hypnotism, peep shows, glass architecture, and performative displays of destruction. Consequently, while this study is firmly entrenched within contemporary academic discourses on…